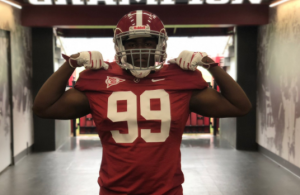 The Central Florida region features several of the state’s top prospects at a variety of positions across the board. With summer camps and combines heating up, Six Star Football is taking an inside look at the prospects college programs are looking at this offseason.

Here, Six Star Football takes a look at several of the top DE/DL  prospects to know in the 2022 class in the Heartland, Mid Florida, Orlando and Spacecoast  areas.

Gabriel Dindy, 6’3, 280, DL/DE, 2022, Lakeland @DindyGabriel (pictured)
An impressive athlete with a great upside and a lot of potential as a prospect and performer at the next level. DIndy has impressive athleticism, hops and a raw ability to make plays on his own regardless of the situation. He swallows up ball carriers and QBs from behind and has impressive size, thickness and speed for his frame and age group. An impressive all-around athlete who has had a massive offseason for recruiting. Dindy currently holds offers from Oklahoma, Mississippi, Virginia Tech, Vanderbilt, Nebraska, Florida State, Florida, and Kentucky to name a few.

Zane Durant, 6’1, 240, DE, 2022, Lake Nona @zane_durant
Durant, a very highly touted play maker that stands in at 6-1, 240 can pack a load and is a powerful end for Lake Nona.  Zane is a player that you would be lucky to block, his moves are among the most impressive you will fine, super quick first 2-3 steps off the snap, OL just look like they are standing in concrete when the try and get in front of him, has that elite ability that has impressed every college in the country and is a very physical and impressive core and body that is D1 all day.  An elite athlete with speed and tenacity that has all the makings of being a big timer at the next level. Among some of the schools that have offered Durant are UCF, FIU, South Florida, Tennessee and West Virginia.

Bryan Thomas, 6’2, 195, DE, 2022, Foundation @fbthomas5
One of those players that is 6-2 ,195 and another DE that really uses his footwork and speed off the edge to his advantage.  Thomas is a play maker that for Foundation has proven that he can be a huge pass rushing threat with his speed and ability to beat the blocker time after time and give some major fits to offenses he faces.  Has a great first step off the snap and is a powerful play maker that has a nice 6-2 frame and a guy that can use some leverage very well also. We like his athletic ability and his speed for sure that make him a nice looking next level prospect.  Holds offers from West Virginia, FIU, Pitt, Maryland, Virginia Tech, NC State, and Minnesota.

Keahnist Thompson, 6’4, 235, TE/DE, 2022 , Lakeland @keahnist
Considered a huge and talented prospect among the best of the best DL in Florida, Lakeland’s Keahnist Thompson is a player that has that D1 frame at 6-4, 235 and is a very versatile athlete that can play TE/DE or OLB for Lakeland.  Thompson is one of those guys that has proven just how much of a pass rushing threat he is, always making QBs run for their lives with his speed and toughness to get into the backfield and cause some major damage.  Also is one of the best blocking TEs you will find out there, one of those players that can deliver some major blows and is a punishing blocker in the open field.