A look at some of the top LBs at the FINALS 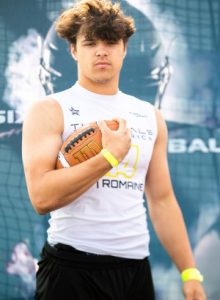 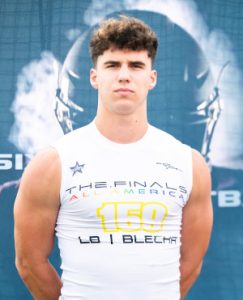 Peyton
Blecha
LB | 6'2 | 220
Kickapoo | 2023, 6-2, 220, LB, 2023, Kickapoo (Mo.) @Plbecha04
A lot of impressive things about this SW Missouri backers game, the Kickapoo Chief is one of the top high energy motor men and is a guy that showed he plays with that top energy each and every snap, looked impressive at the FINALS, a good motor to the ball guy who goes all out and has a good football IQ as a play reader and is a key senior play making defender to know for 2022.  6-2, 220, very good size from his inside backer spot, a player that can make a lot of plays and a very nice side line to side line play maker in the mid defense.  Also a backer that has some impressive hops and good backer speed as well. 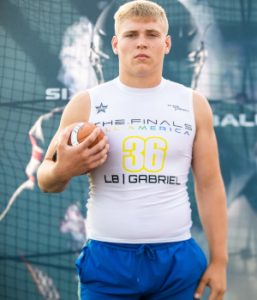 Ryan
Gabriel
LB | 6'1" | 220
Ord | 2023, 6-1, 220, LB, 2023, Ord (Neb.) @RyGabe2023
Good looking play maker that has some size also at 6-1, 220 from Ord High School in Nebraska, Gabriel will be a guy to have on the Nebraska highschool radar for backers with size and talent to know entering the 2022 season ahead.  Ryan is a player that is also a wrestler and has that impressive toughness and ruggedness to his game in the middle.  Fills the gaps will and is one of those guys that can be a nice downhill play making tackler that reads and reacts well to plays, very good in the middle as a player that comes up and makes the play quickly before it has a chance to develop. 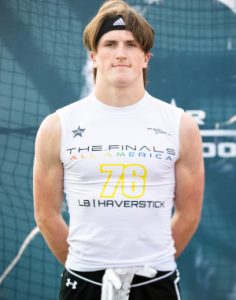 Wyatt
Haverstick
LB | 6'2 | 195
CBC | 2023, 6-2, 195, LB, 2023, CBC (Mo.) @haverstickw05
A top performer out of CBC in St. Louis and one of the big senior leaders of the defensive unit this year will be this 6-2, 195 backer.  Haverstick is a player that has a lot of natural football ability in the middle and is a player that will be looking to help CBC chase down another state title in 2022, good looking edge player that can hit you from either his backer or a DE spot in the lineup.  Plays hard and fast off the edges and is one of those players that can be all over the field for big plays. Also will be a key special teams player and contributor. 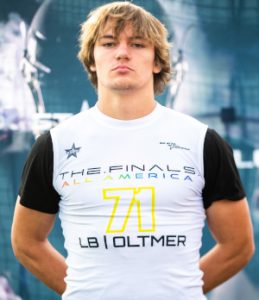 Adam Oltmer, 6-0, 200, LB, 2023, Aquinas Catholic (Neb.) @OltmerAj
Oltmer is a player that has a big motor to his game, the Aquinas Catholic play maker from Nebraska is a middle man that can use both speed and power to be a major force for Aquinas, Oltmer has some rare backer speed in the middle that makes him one of those guys that can really get up the field and cover space in a hurry, Adam also reports an impressive 295 pound bench press, and a 585 deadlift squat as well. Look for Oltmer to have a big senior season this year and be one of the top risers in Nebraska’s ’23 backer class.

Peyton
Osborn
LB | 6'0 | 190
Blue Springs South | 2023, 6-0, 185, LB, 2023, Blue Springs South (Mo.) @PeytonOsborn5
Osborn could have been the top cover linebacker at the FINALS, a player that really showed he has the speed and the ability to battle and cover WRs in the open field and make plays on the ball in the air and bat away passes in the air, really gave a lot of targets fits at the event and showed he was a very versatile backer, Osborn has speed and power, reports a 265 pound bench press also at 185 pounds, one of those strong pound for pound guys that also has a motor and some good footwork.  Impressive looking all-around athlete to take notice of from Blue Springs South High School. 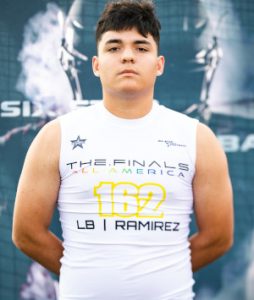 Christian
Ramirez
LB | 6'2 | 205
Lansing | 2023, 6-2, 205, LB, 2023, Lansing (Kan.) @Christi95095394
One of the Kansas players that was impressive at the FINALS, Ramirez will look to have a big final year for Lansing, a program that has had some good backers, 6-2, 205, Ramirez has the size to attract some college attention and is a talent that should be one of the key defensive players this year, a good backer to have on the riser prospect list for senior backers to know of Kansas. Ramirez can play middle and outside backer.  Has had a busy camp/offseason and will use that experience to impact his game for 2022, good looking athlete to watch for this year coming up.

Austin
Romaine
LB | 6'2" | 220
Hillsboro | 2023, 6-2, 232, LB, 2023, Hillsboro (Mo.) @austinromaine2
Hillsboro 2023 Austin Romaine continues a meteoric rise this offseason that has seen him draw numerous Division I offers and significant interest from Power 5 programs in recent weeks as he earned both the LB MVP and the overall MVP of the first session of Sunday’s All-America Showcase at Liberty North (MO) High School. At 6’2, 220-pounds, Romaine has the kind of size and athleticism that college programs look for and combines those attributes with a projectable frame. He has good speed, reports a 40 yard dash time of 4.64 and shows terrific agility and flexibility for an athlete his size. He has good instincts for the position as he can quickly dissect a play and fly to the ball. Romaine has shown the ability to drop back into some pass coverage, can get off blocks and fly to the ball and is a hard worker in the weight room.  He was a first-team All-State linebacker as a junior as he recorded 85 tackles, 19 TFL and eight sacks, was also a major productive running back for the offense as he rushed for over 1,000 yards. Also a standout baseball prospect, Romaine is a strong student as well, reporting a 4.33 GPA. He has drawn offers from New Mexico State, Rice, Murray State, Penn, Columbia, Tulane, Northern Iowa, Air Force, SEMO and Lindenwood and is drawing interest from several others. 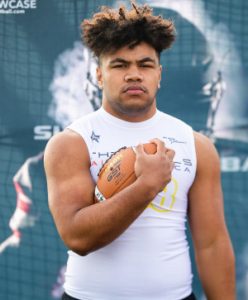 Sa'o
Siavi'i
LB | 6'1 | 229
Lee's Summit North | 2023, 6-2, 245, LB, 2023, Lee’s Summit North (Mo.) @34SAOSIAVII
One of the top football bodies out there, 6-2, 245 has D1 backer size no doubt entering a big senior season at Lee’s Summit North High School, should be a very fun player to watch this upcoming season, Sa’o has the athletic frame and the skills to really gain a lot of next level attention and should one of the most highly touted and watched backer prospects in the  Missouri senior class this year.  Physical player that gets after it and is a guy with a big motor and an athletic power frame.  K-State is one of the programs that has shown a lot of interest among D1s looking early. 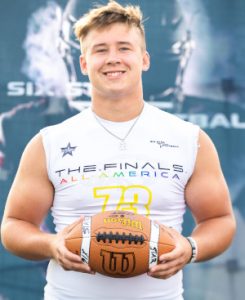 Draven
VanGilder
LB | 5'9" | 205
Joplin | 2023, 5-9, 195, LB, 2023, Joplin (Mo.) @DravenVanGilder
Middle linebacker in the class of ‘23, VanGilder is one of the most impressive linebackers in SW Missouri, a First Team All-COC player at backer, named a Missouri Class 6 District 3 All-District linebacker and was a First Team All SWMFCA player. No doubt VanGlider is a tackling machine that broke the Joplin High School school record for tackles with a huge junior year of 173 tackles.  Also is a rugged and physical player that uses his wrestling background to be one of the most physical backers in the state. 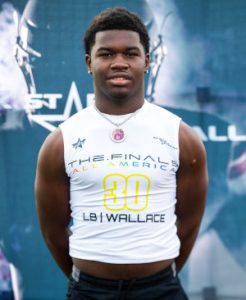 Gyasi
Wallace
LB | 5'10 | 195
Collierville | 2023, 5-10, 195, LB, 2023, Collierville (Tenn.) @gyasiwallace
Wallace was a Second Team All-Defensive player for Collierville High School in Tennessee this past season and went well over 50 tackles on the year with several pass breakups as well and a backer that can also plays some tough pass coverage defensive from his backer spot, the 5-10, 195 Wallace is a tough and active middle defender that has the talent to be a major leader and senior veteran this year and will be looking to follow up a very good junior campaign with a big senior year in 2022 and has the skills to real in several college offers as a top play maker backer to know. 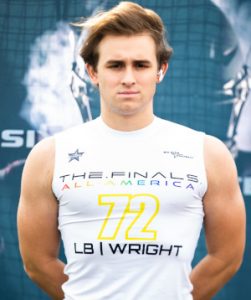 Cameron
Wright
LB | 6'0 | 200
DeSmet | 2023, 6-1, 200, LB, 2023, DeSmet (Mo.) @camjam1818
A player that will be looking for a big senior season in the middle defense for DeSmet this year. Wright is a very impressive play maker that has some speed and has packed on some muscle to 200 pounds entering his senior season ahead. Cameron will still rely heavily on his speed and play making abilities to make key plays in the middle.  A very talented  outside backer with speed and nice instincts to make hard plays on the outside edges, Wright has a lean and physical looking frame.  Can play against the run of the pass well and has a high football IQ. 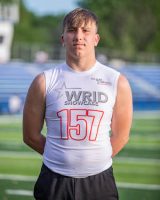