Big men in the '23 class shine at Finals, Offensive Lineman to know 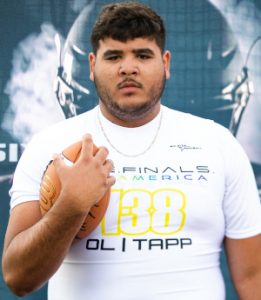 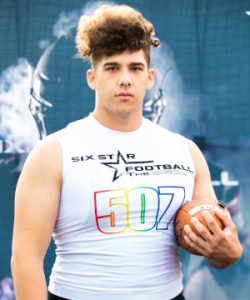 @tbfb52
A solid prospect on the offensive line who has speed and good combination of both lower and upper body strength. Baird was a standout at Saturday’s Last Chance Showcase and earned an invite back to Sunday’s competition. He looks to use leverage to his advantage and has the size and build that college programs look for. He has continued to improve his technique and footwork and shows potential at his position moving forward. Baird plays a tough and physical brand of ball and can win one-on-one matchups at the line. A player with underrated speed who has a good work ethic and is quietly improving his game. He recently picked up recent offers from Culver-Stockton and Benedictine. 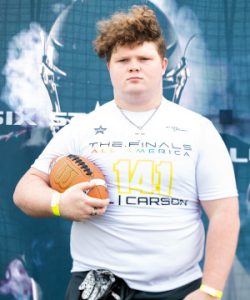 @LandonCarson11
A strong, physical lineman, Nixa 2023 Landon Carson is a tough interior lineman prospect who can open big holes in the run game and has surprising quickness as a pass blocker. He uses terrific hands and technique to wall off opposing pass rushers and uses terrific balance, leverage and a low center of gravity to wall off defensive linemen. He is an aggressive player who has a good feel for his position and he plays hard and with a lot of power off the line. He gets into the action quickly and can make an impact close to the line. Carson reports a 325 bench, 540 squat, 600 deadlift, 5.33 40 yd dash, 21.4 vertical and an 88 inch broad jump. He was among the top linemen in Kansas City and has picked up recent offers from Missouri Baptist and Culver-Stockton. 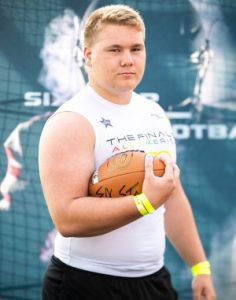 @GarrettD65
Its hard to be Davidson when it comes to pure strength and toughness, this Nixa Eagle lineman reports a bench press mark of 305 pounds, a 455 pound squat, and is a very good looking athlete as well that has a big upside. One of the more impressive looking ‘23 OL prospects to know coming out of Southwest Missouri. Should be looking for a big year as a senior for Nixa and a player that has the power to garner some college attention. 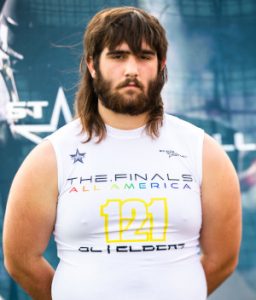 @noahelbert5
No doubt one of the most scrappy and tough trench warriors out there we have seen this year, looked impressive this year on several occasions that we saw him in action, good player down low and a player with a lot of potential for Valle Catholic. Player that has a lot of heart and the offensive lineman had an impressive performance at the KC Varsity Combines, advancing all the way to the finals of the King of the Hill competition at the end of the event. Elbert is a strong, physical player who relies on quick feet, strong technique and a determined attitude. He is a two-time all-state player who has also impressed on the defensive line. 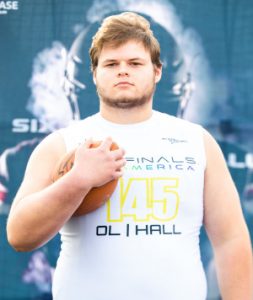 @RyanHall2023
Hall brings real toughness to the field for Lee’s Summit West and is able to knock opponents back quickly after the snap. He is a versatile lineman both for the run game and pass protection and is good at standing his ground and absorbing contact.  A 6’1, 305-pound OL who shows good focus and leadership and continues to put in the work both in terms of his technique and his overall physical makeup. He pushes himself in the trenches, has good stamina and a strong, well-balanced frame overall. He continues to increase his weight room numbers, now reporting a 500 squat and a 300 bench press. 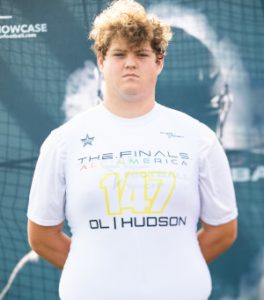 @zach_hudson70
The big man from Seckman has a lot of upside to his game in the trenches, Hudson at 6-4, 305 pounds has both major size and major power, good leverage as well. Hudson reports a 285 pound bench press, a 500 pound deadlift, and a 460 pound squat, no doubt a senior big man that could turn some heads as he enters a big final year at Seckman. One of the pure power big men that has made a big name in the offseason and is a player that is a riser in the OL class for Missouri big men to know. 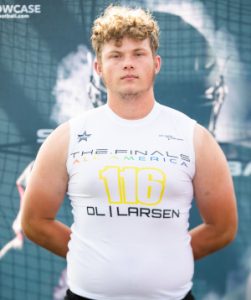 @Clarsen54
Chickasha big man and a key junior manning up in the trenches this year is 6-3, 245-pound 2023 Christian Larsen, looking powerful and making a lot of key blocks up front.  A much experienced and key ten game starter, Larsen  started every game he’s been in since the start of sophomore season. One of the most aggressive lineman in the state of Oklahoma, Larsen is a very technical offensive and defensive lineman who has good foot work and works well with his hands.  Very good at setting the edge on the offensive line that makes for a strong outside run game. 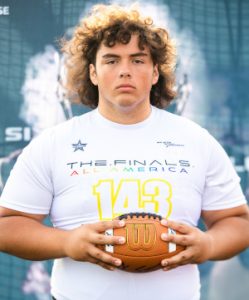 @noahmacias20
One of the most underrated offensive line prospects in the Kansas City area, 2023, Noah Macias is a strong, physical offensive lineman who shows terrific feet, a low center of gravity and a strong base. He likely projects as an interior guard, but saw some time at tackle last season where he excelled as well. Macias is terrific pulling down the line where he shows good agility. Also a track and field standout, Macias wrapped up competition at the state championships on Saturday as he placed sixth in the shot put. He picked up his first offer from Benedictine on May 5, and has drawn interest from several others, including Northwest Missouri State, Louisville, Wisconsin among others. 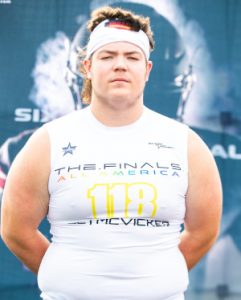 @mcvick8
McVicker is a stout lineman who hits hard and can hold his own against top competition. He is a strong RG/LG at 6’1, 270-pounds and he can knock defenders off their path and even quickly take them to the ground. He has quick hands and can even find ways to turn opponents and force them away from the ball. He has some mobility to his game as well, a physical player who can get off the line and help open holes for the run game. 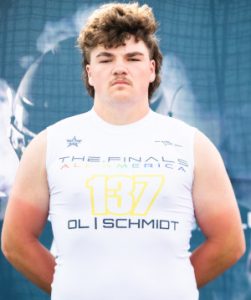 @CarterBSchmidt
A talented edge blocker from Kearney who has a good combination of size, experience and a strong all-around work ethic. Carter is a player that has very good movement on the line, impressive footwork, and a player that can use his length and size to take defenders out of plays. He’s listed at an impressive 6’5, 265-pounds and he has a lot of room to grow physically as he continues to push himself in the weight room. A big stock riser this off-season who is starting to turn some heads. Also a standout student, Schmidt reports a 3.9 GPA and 24 ACT. He has drawn recent offers from Peru State and Benedictine.

@ChayseTapp
Tapp is a promising playmaker who has good strength, awareness and some versatility on the line. He is a tough and sturdy athlete who has good speed, good muscle tone and also underrated athleticism for a lineman. He shows mobility in the run game and can get out and create large gaps. Tapp is a muscular 6’3, 295-pounds and he still has room to grow physically. He has very strong hands and can easily push and pull pass rushers and quickly knock them to their feet while staying in position and in his place. Tapp has a host of honors in his career including 3x all conference, 2x all region, 2x all district and 1x all state. He currently holds offers from Tennessee State, North Alabama, Central Missouri and SBU.