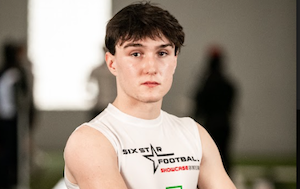 UP NEXT I St. Louis prospects poised to draw first offer (2023)

With the 2022 off-season underway, Six Star Football takes a look at several rising St. Louis area prospects in the 2023 class who are drawing new college interest and are poised to earn their first offer soon.

Arhmad BranchArhmad
Branch
WR | 6'1 | 170
Festus | 2023, 5’11, 155, WR, 2023, Festus @arhmad1branch
A multiple sport athlete who shows good athleticism and terrific leaping ability. Branch is a first option wide receiver who can perform well against any defensive back he has matched up against. He has good speed and good sleeping ability and is extremely creative with the ball in his hands. A smooth and nimble player who stays in motion and is constantly looking for the ball and working to create separation.  Branch is also a varsity point guard and triple jumper and reports a 36-in vertical and a 4.65 40-yard dash. Last season he averaged an impressive 30.9 yards per catch on 34 attempts and had 1,049 receiving yards in 10 receiving touchdowns.

Matt CraigMatt
Craig
OL | 6'2 | 263
Liberty | 2023, 6’3, 262, OL/DL, 2023, Liberty @matt55wrestling
A solid athlete who can see time on both sides of the ball. Craig has good size at 6’3, 262-pounds and shows a lot of force and good leverage at the snap. He gets off the line with good speed and can out-play, out-hustle and out-work opponents and find paths to the backfield. A player who applies good pressure and has improved form and overall technique. Last season he recorded 38 total tackles with 19 solo, 19 assist, two tackles for loss, three sacks and two fumble recoveries. Craig has a 270 bench,425 squat and a 265 clean. He also reports a 3.64 GPA.  He has drawn interest from Southern Illinois, Wagner, Northwest Missouri State and others.

Nic Dudley, 5’9, 160, RB, 2023, Lutheran @Sli3k__
A smart and quick player who can see time as a ball carrier. Dudley is a strong player at 5’9, 170-pounds and he shows a good work ethic and is constantly looking for ways to take his game up a notch. He continues to work on his strength and conditioning in the off-season. He reports a 4.87 40-yard dash and has a 160 bench, 225 squat and a 290 deadlift. Dudley has been a standout during indoor track and has drawn interest from several college programs Kansas and Dartmouth. 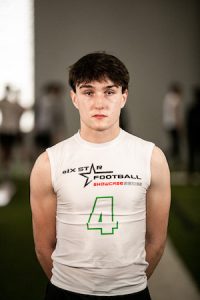 Patrick
Fortune
S | 6'0" | 180
Kirkwood | 2023, 6’1, 180, DB, 2023, Kirkwood @PT_Fort20
An all-conference DB who shows good strength, physicality and an ability to anticipate plays and get to a spot before the ball carrier. A player who has increased his size and strength from a season ago and continues to develop and show good improvement. He is a good run stopper, can rush off the edge and find ways through blockers and get to the backfield where is a strong finisher in space. Last season Fortune recorded 61 total tackles with 46 solo tackles with 11 tackles for loss,15 assists, one fumble recovery and one interception.  Fortune recently visited Southern Illinois and has drawn interest from several other programs as well. 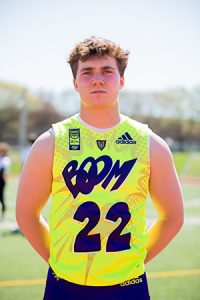 Jake
Hnilo
ATH | 5'11 | 190
Lindbergh | 2023, 5’11, 190, RB/LB, 2023, Lindbergh @jake_hnilo 3
An all district and all conference athlete who has a versatile skill set and good overall muscle tone. A tone 5’11, 190-pound prospect who shows good production on both sides of the field. He is creative with the ball and is able to showcase some creativity and elusiveness, but is also a physical rusher who uses his strength and speed. Last season he averaged 6.9 yards per carry on 188 attempts and had 1,288 rushing yards and 17 touchdowns. He also had 288 yards receiving on 18 attempts and averaged 16 yards per catch. Defensively he recorded 21 tackles for the year and also averaged 19.6 yards per return on 10 attempts.

Gavin
Marsh
WR | 6'0 | 180
Marquette | 2023, 6’0, 180, WR, 2023, Marquette @gavinmarsh80
A first team all-conference and all district wide receiver who has quick feet and is able to get out and create with the ball in his hands. He is quick in straight line situations, but he is also quick when changing directions and can evade contact well. Has some high point ability as well and can pull in passes over his head and off his stride. A player who can find openings with his routes and shows good escapability after the catch and high overall IQ. Last season he recorded 42 receptions for a school record 987 yards receiving and had 12 touchdowns. Marsh also reports a 3.91 Pro Agility.  He recently visited North Alabama and has drawn interest from Southern Illinois and several other programs as well.