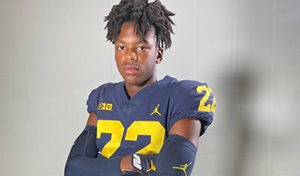 WATCH LIST | Young Broward Area defensive playmakers to know (2025) – We look at some of the more impressive stock risers and names to know among defensive standouts in the Broward area. Lots of power and speed, from big men in the trenches to hot LB prospects with speed and big time play making secondary men to know.

@AshtonAbell2025
Abell from Coral Springs Charter may project more as a future center prospect and big man on the offensive line, but he also could end up playing more and more at the DT spot and being a very impressive play maker to take notice of on that side of the football.  Abell is a player that can bull guys over with his power and strength, right now he has the makings of being a very good offensive  lineman but he could use that power on the DL as well as a major pass rushing threat if needed.

@ArmondoBlount
Blount is one of the most athletic looking younger DE’s in the area, built for the game also with power at 6-2, 232 pounds he no doubt can bring some toughness coming off the edge and moves very well with his size and power on the end.  This Dillard ‘25 DE is one to know and a player that is getting a lot of D1 looks, no doubt this guy is one of the blow it up kind of prospects to watch out for coming up in the Broward Area.

@NimariBrantley
Brantley is a very talented player and athlete that can make some huge plays happen from his middle backer spot at Coconut Creek.  Brantley is a player that has some power also, 5-11, 220 and a guy that loves to hit and hit very hard in the middle,Nimari is a player that can do a lot of things very well, even is good at dropping back into pass coverage and reading the play and QB, young and already one of the most talented defensive players on the team at Coconut Creek.

@TimothyCokley1
Cokley is a fine two way athlete that can lay running back and defensive back for Deerfield Beach.  A player with some speed that is impressive with a big time motor and a player that plays with a lot or energy on the field.  Had over 15 tackles, and added 10 pass deflections in the secondary unit as a play maker that was tough to catch on. Also a kick return specialist with some major speed and impressive field vision.

@ChrisEwaldjr
Ewald is one of the most talented and impressive looking athletes out there and this Chaminade-Madonna freshman corner has the speed to back it up as an elite looking speed man in the secondary unit.  No doubt a major talent doing some huge things and a player that can really deliver some hard hits also.  Had 30 tackles in 10 games as a freshman  this year and was one of the top young faces to know this year, really came on strong out the gate and is one of the guys that is a huge future star for talent and speed in the lineup.

@shOtime_3
Hall is one of the most talented young defensive backs in the area and a play maker from South Broward that can be a fast and impressive lockdown defender.  Hall is one of the better tacklers in the young 2025 class, very good at getting into the passing lanes and making deflections and pass breakups on  the ball in the air,  and is no doubt one of the better young play readers in a Florida secondary unit to know.

@FJohnsonJr11
Johnson is a very impressive looking big man and Defensive End prospect to watch out for, one of those players that will look to use his speed to take over games on the outside edge as a key up and coming rush end at Flanagan.  Johnson is only going to get better and better with time and has all the athletic skills to be one of their top defensive standouts in the near future at Flanagan.

@cxrtifi3dcs
Sweet is a very impressive looking athlete that can make some huge plays happen and is one of those athletes that can use his speed to cover a lot of ground in a hurry, Not big but if his speed can lead to lots of big lays in the middle Nova may have a good athlete here that can make a lot of key plays for the defensive unit in the 2022 season.

@gloryboylv
Lens is a very impressive looking play making coming up from the Nova program and is an athlete that can make some big time plays happen in the  middle for Nova High School. Valbrun will look to be an impact maker and is lean and fast,  could also move the the secondary unit, one of the younger names to know coming up in the program at Nova.

@TonyYoungbull
Ward is a very impressive looking speed backer in the lineup for the program at Blanche Ely, 5-8, 160, so not a big guy, but his speed can really offset his size and Ward is a flyer from his outside backer spot on the football field.  Antonio is a major edge speed play maker, very fine blitzer that can be a major menace in the QBs face with his edge speed and fast acceleration to the QB. Big time run stopper also with his quick footwork and play reading skills.