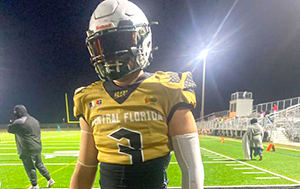 @BeverlentzB
Bernard is a play maker that can make some impressive plays happen and is a sophomore at Evans High School,  5-10, 173, a key speed weapon of the future for the Evans team, Bernard is a player that will be getting a lot more time in the 2022 season and is one of those athletic looking play makers we think will be a key riser at Evans.  Very athletic frame and a player that will look to use his athletic skills plus speed to be a key impact making junior for 2022.

@LynwoodKornegay
Lynwood is a very impressive looking player against the run and a run stuffer that will look to be an impact maker as a junior in the coming 2022 season.  Lynwood has some toughness to his frame and could go over 200 pounds this offseason for more power and toughness in the middle of the lineup.  No doubt Lake Howell will be looking for veterans to step up and make key plays in 2022 and hopes are Lynwood will be one of the main men in the middle to help the defense be tougher in 2022.

@ColeLowry44
A very impressive freshman prospect at middle linebacker for Colonial, Lowry is a 5-11, 190 play maker that can play well beyond his years as a freshman. This hot play making middle linebacker/Outside linebacker, is a great edge and up the middle blitzer, and Cole is very good at getting off of blocks quickly to make tackles along with being a great in zone coverage man and pretty impressive at being an in man even against fast receivers. Lowry had 90+ tackles, 20+ tackles for losses, four sacks,two forced fumbles and seven QB hits.  Lowry reports a 40 yard dash time of 4.8. 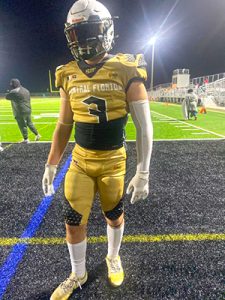 @nmaddox1313
Maddox is one of the names coming up that has some good speed on the outside edge for the program at Central Florida Christian Academy.  Noah is a very  impressive cover the entire field backer, very quick to read and diagnose a play in front of him and then has a quick first step to make the impressive plays happen with good footwork and lateral quickness in the outside edges.

@g6nix
Nix  is one of the most athletic looking play making linebackers in the Orlando area, a man made to play backer, fast and furious for the football on the field, this 6-0, 205 outside backer from Lake Highland is a play maker that can make it happen and helped Lake Highland to an undefeated 11-0 state championship season as well. One of the top major talents in the freshman class that really made a big time name for himself in the early going, Nix is a big time college prospect to know.

@LorenzoxPayne
Payne is a very impressive hard hitting machine in the super sophomore class for the well known Apopka program and is one of those guys that is very fast and very physical from his outside backer spot, good looking Orlando area outside man that at 210 pounds is very  fast and one of the hardest hitting OLBs in the Orlando metro area. For now Payne has ended up finding his primary home at fullback/running back and will be looking to change to running back this spring, Payne reports a 40 time of 4.6 and his best skills are his speed for his size, strength and hands and footwork.

@daltenphelan24
Phelan is a very impressive looking linebacker and DE hybrid edge speed rusher and contain man for the defense at Harmony High School,  6-2, 200 pounds, Phelan is a player that already was second on the team in tackles as a freshman with 71 in nine games.  No doubt a fab freshman, Phelan had 17 solo and 54 assisted tackles in his huge 2021 season and averaged 7.9 tackles per game and had a huge 15 tackles for losses as a major pressure play maker against the running game.

@AlfredThomas407
Thomas is out of the Dr. Phillips program, a sophomore that is at middle backer, Alfred is a player that is one of the bigger sized backers and carries 215 pounds in the middle of the lineup for Dr. Phillips to be a forceful hitting machine. Thomas is one of the best combinations of size and speed that you will find in a linebacker in the Orlando area, very fast feet off the snap and can really fly to the football in a hurry for sure.  Impressive quickness to the football and a big time looking play maker to know.

@SolomonTripline
Tripline is a very impressive looking athlete that can make some big time plays happen for the Edgewater defense and will be teaming up with Damon Troutman, both sophomores, to be a force in the middle defense for Edgewater.  Tripline, 6-1, 192 pounds, is a class of 2024 grad that we think will become a more experienced play maker soon, has a good football frame and could be one of the emerging names to know on the team for the upcoming 2022 season.

@TroutmanDamon
Troutman is one of the guys that proves you don’t have to be big to be a very impressive play maker and linebacker on the outside edge and his speed leads to a lot of huge stops and plays against the football for the Edgwater ‘24 grad.  Troutman is a play maker that led the team in tackles with 88 and had an 11 game total of 53 solo tackles and 35 assisted tackles on his huge sophomore season.  Had eight tackles for losses and averaged eight tackles per game as the top speed play making backer in the Orlando area.