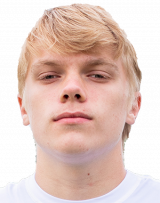 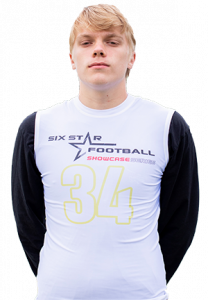 ▪️  SIX STAR FOOTBALL SCOUTING REPORT A nice youngster who has a good frame and some underrated power to his game. He held his own and showed some overall confidence and was able to use leverage to his advantage. Has a good head and understanding and listens to coaching and looks to use a lot of strength and energy in each set and focus on his drills and technique training.

▪️  ANALYSIS A young player who has an interesting skill set and could possibly see time in several positions. He has a good motor for his age and can handle tough prospects and shows a combination of lower and upper body strength for his frame. Has good energy and momentum and the speed to drop back and handle athletic pass rushers on the edge, getting off the line quickly when locked in and focused. A young player who can absorb contact fairly well given his weight and has good hand placement. A tough player who has some quickness to his game and one who will improve during the off-season and continued strength training and footwork.