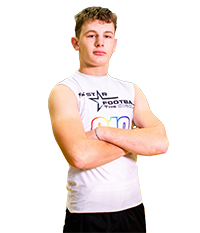 ▪️  SIX STAR FOOTBALL SCOUTING REPORT Howard raised his profile and showed that he was among the top stock risers in attendance among LB prospects at the Six Star Football Showcase in St. Joseph. He ran a laser timed  4.90 40 yard dash, good for a third place tie among LB prospects, along with a 99 inch broad jump and 26 inch vertical. Howard was an honorable mention All-GWAL selection as a sophomore last season after recording 35 solo tackles, 28 assists and two fumble recoveries. Howard shows terrific upside as an OLB with the potential to grow into an athletic frame.

▪️  ANALYSIS Howard has a good build at 6’1, 180-pounds that has potential to add muscle mass and weight with age and continued work in the weight room and could be over 200-pounds as an upperclassman. He is a fluid athlete with good start/stop and change of direction abilities. His film shows a player that reacts quickly, runs exceptionally well and is capable of breaking down and containing runners in space. He is a standout 1v1 tackler, shows good leverage against opposing blockers and uses his hands well to free himself. Howard was a playmaker in opponents backfield last season. He is at his best standing up against the run, but also shows promise dropping back into pass coverage where he has good length and can disrupt plays. 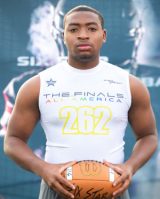 INSIDER: Defensive Players in the city of Wichita earning respect