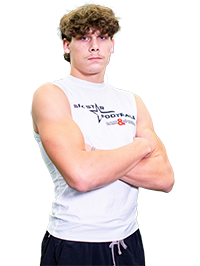 ▪️  SIX STAR FOOTBALL SCOUTING REPORT Hughston appears to be the next big thing out of West Plains with a terrific combination of size, athleticism and playmaking skills. He consistently torched smaller DBs at the Midwest Showcase, getting downfield separation and making tough catches over the top. He recorded a 4.90 laser timed 40-yard dash, 107 inch broad jump and 31 inch vertical leap — all among the top marks for WR prospects at the event. Hughston is coming off a big junior season for the Zizzers. He hauled in 35 passes for 664 yards and five TDs as part of the Zizzers’ high-powered offense.

▪️  ANALYSIS Hiughston has elite size, length and an athletic frame that is still filling out. He has a high ceiling as a playmaking hybrid WR/TE prospect. He is a big target downfield, is willing to work the middle of the field and shows strong, consistent hands. Hughston is a good leaper and presents a big catch radius. Is capable of climbing the ladder and winning contested 50-50 balls. Is difficult to press due to his size and strength, is an improving route runner. Has long running strides, can pull away from defenders in the open field. Is a physical blocker on the edge, can spring big runs downfield. Potential future D1 prospect.