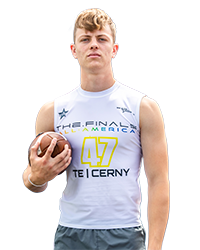 ▪️  SIX STAR FOOTBALL SCOUTING REPORT A very long and athletic lean TE, who has good hands and can make plays with the ball in his hands. He can handle contact well for his size and is very athletic. Cerny was one of the standouts at the 6Star Football Showcase in Nebraska and led all performers there with the top vertical jump, a mark of 35.1 inches. He also tied for second best broad jump distance with a jump of 9’3 and was third fastest athlete in the 40 yard dash with a laser timed 4.76 mark.

▪️  ANALYSIS A strong and well-conditioned athlete who shows good focus and production on both sides of the ball. He has good hands, a good sense of direction and is able to dive out and make plays. He is a catch-and-create athlete who is able to make a lot happen when it looks like there is nothing available and the defense is collapsing. He has good hands and is able to make athletic catches in heavy traffic and can pull down overthrown passes as well. He is very good at avoiding contact and making opponents miss in space but is also strong enough to lower his head and look to run through opponents. Also a very active and intelligent defensive prospect, sees time as outside linebacker and as an edge rusher and is very good at wrapping up opponents and even making stops in the backfield.

Six Star Football takes a look at several talented TE prospects ready to show out at The FINALS.