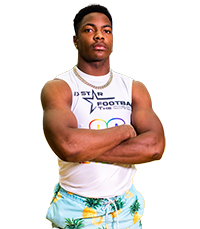 ▪️  SIX STAR FOOTBALL SCOUTING REPORT One of the rising SB/OLB prospects in the 2024 class, Burch is coming off a standout season as a pass catcher for Christ Prep as he led the Patriots in receiving, hauling in 40 passes for 623 yards and five TDs and made 42 tackles and two INTs on defense. He was also a dynamic return man, averaging more than 17 yards per punt return.

▪️  ANALYSIS Was easily among the most impressive RB prospects at the event, showing terrific quickness and burst and was difficult for LBs to get a hand on him in 1v1s. Burch competes with a low center of gravity, has terrific start/stop and acceleration and has quick feet — able to make defenders miss in space. His film shows a versatile and well-rounded player capable of doing a variety of things well. Burch is a talented pass catcher who can make plays downfield, shows good hands and showed the ability to make plays as a receiver at Missouri Western.