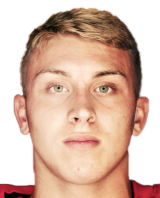 Clinton's Bryson and Newcomb among eye catchers In SW Oklahoma

A look at several rising prospects in 2021 class.

Ethan Downs, humble super standout making a name for himself at Weatherford.

★TOP 10: A look at the Oklahoma’s top TE Prospects

A look at the top TE's in the Oklahoma City area

SIX STAR FOOTBALL SCOUTING REPORT:  For sure among the most freakish athletes in the entire area and one of the best in the entire state, the muscular and athletically gifted Downs should be the most sought after player in the state or at least among the elite. Downs runs a 4.68 in the 40 and holds a 33.5 vertical with a 325 bench and a 36 power-ball. At 6-4, 235 has that size that makes D1 schools drool and we see why, one heck of a player and talent with that next level body already primed and ready to go.