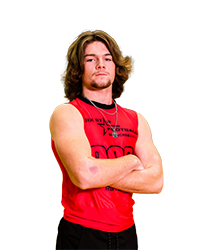 72 Fisher Dye | 5’8, 156 | RB | 2025 | Mulvane (Kan.) | @FisherJayDye1
▪️  SIX STAR FOOTBALL SCOUTING REPORT Raised his profile at the Midwest Showcase, turning in an impressive combine performance that included a 4.90 laser timed 40-yard dash — one of the top marks for prospects in his age bracket. Dye also recorded a 103 inhc broad jump and 31.6 inch vertical — which tied him for sixth best among RBs. Dye has the ability to come up with big runs, can hit the edge and turn the corner, and shows good hands and playmaking skills out of the backfield. He is one of the more underrated prospects in his class in Kansas.

▪️  ANALYSIS Not very big at 5’8, 156-pounds, but shows good strength and power in his lower body, bounces off would-be tackles and can finish runs. Dye has good speed and can pull away from a defense in the open field. Impressed with his quick cuts and footwork in the agility portion of the Midwest Showcase. Beat several talented LBs in 1v1 drills. Dye is an excellent receivers and impressed as a pass catcher during drills at Missouri Western. His film shows a player that can work the edge of a defense and can pick up big yardage in the secondary.