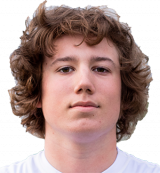 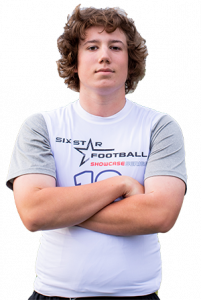 ▪️  SIX STAR FOOTBALL SCOUTING REPORT A versatile multiple sport athlete who can see time on both sides of the ball. He brings good energy to the field and is capable of getting his feet set and moving quickly off the line. He brings a good sense of urgency and is constantly listening and taking in new information and applying it to his game in real time. A smart player who shows up and looks to compete and plays hard against older, more experienced linemen.

▪️  ANALYSIS A pliable athlete who has good feet and listens and looks to find an advantage wherever he can. A young player who has a good feel for the OL and is able to move around some as well, showing good footwork.He can drive his feet forward well and has a strong kickslide as well. He is a young prospect and has a somewhat thin frame, but will likely continue to fill out and add muscle as he ages. Very capable prospect who plays with good speed and aggression for his build. Holds his ground well and has mobility and absorbs contact fairly well for a player at his size and age.