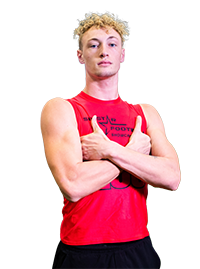 ▪️  SIX STAR FOOTBALL SCOUTING REPORT Morrall is an underrated two-way prospect who competed at both receiver and OLB this season for Page. Was one of a handful of senior prospects recognized for their performance at the Midwest Showcase. Big size at 6’3, 205-pounds, Morrall is a standout athlete who recorded a 112 inch broad jump and 36,5 inch vertical.  His broad jump mark was 17th overall, and his vertical leap mark was fifth overall in a field of 400 athletes. Holds 18 offers from a variety of programs and plans to sign on Feb. 1.

▪️  ANALYSIS A long and athletic player who has some real upside as both a WR and as a returner. He is listed at 6’3, 195-pounds who runs hard and can stay on his feet and spin his way out of tackles. He has good hands, good vision and he shows acceleration and the ability to go up and bring down a pass. A player who does a lot after the catch and can move well in his route and create separation. Also a player who can make tough catches through contact and can use his size for overthrown passes.

A look at top performers at WR from the Midwest Showcase

SROCK RISERS I Rising underclassmen to watch this offseason