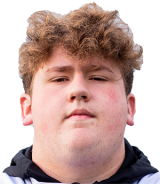 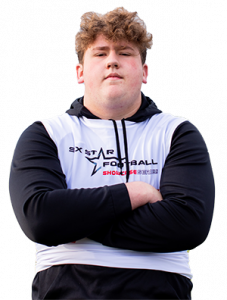 ▪️  SIX STAR FOOTBALL SCOUTING REPORT An out-of-area youngster who has a great work ethic and a coachable mindset. He is a solid player who has a lot to offer and he showed good confidence in his game and showed up against much older and stronger and more experienced players. He has a good feel for both sides of the ball and looks to get the most out of each down and play and drill he can. He has been working on his footwork and has very good energy and a good motor for his age. A player putting in the time and is capable of seeing action on the varsity level.

▪️  ANALYSIS Has good upper body strength and good shoulders. Plays with the intensity you look for and he is learning how to be a more effective playmaker. Has a very good first step on defense and can get an angle and work his way through opponents. He can initiate contact quickly and is comfortable with the physical up and downs on the interior. Uses his shoulders well and has good arms and can turn opponents and push them off and then find his way to the ball carrier or even get to the backfield and make a play on the quarterback. Uses his hands well and shows good placement and a good overall IQ for the game and at the positions he sees time at.