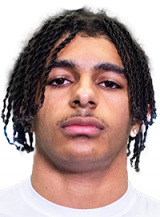 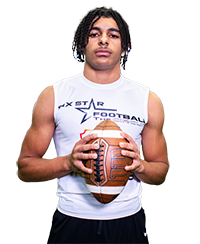 ▪️  SIX STAR FOOTBALL SCOUTING REPORT One of the impressive looking seniors on the radar, Byers was riser at the 6Star Football Showcase and tied for seventh best 40 yard dash time among WRs in attendance with a 4.74. Also had an impressive 33 inch vertical at the Showcase in St. Joseph. One of those guys you can watch play and see really making some tough catches, one of the better looking athletes out there in the open field, Byers has some ups also and can make some of those catches that a lot of guys his size just can’t make. Byers earned All Centennial League 1st team and had 26 catches for 572 yards and five touchdowns this season. Also earned Honorable Mention All-State honors for his big senior season.

▪️  ANALYSIS A very underrated player in his class who is still flying under the radar in recruiting. Byers is an experienced slot receiver who has good hands, good footwork and is able to make catches and then turn and go to work on the ground. He has an eye for openings and the creativity of a back. A versatile athlete with a good sense of direction and the ability to start and stop and create separation with his routes. Also a player who can get up and make some impressive catches through contact. A player who runs hard, can make plays on the ground and through the air as a receiver.