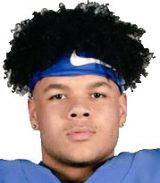 A look at players who impressed in Friday's Class 5 playoff game.

A look at some of top performers for CBC in its win over Vianney.

Six Star Football takes a look at the players who raised their profile in St. Louis.