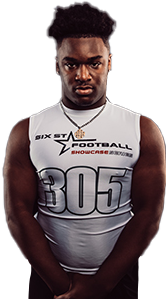 ✅  SIX STAR FOOTBALL SCOUTING REPORT: Extremely productive prospect who has been able to make things happen since he stepped foot on the field. Has a strong frame and underrated game, strength and playmaking ability. Has been flying under the radar in recruiting, has good upside, has seen attention from a variety of programs. Reports a max 435 squat, 225 bench, 425 deadlift, 4.89 40-yard dash.

✅   ANALYSIS:  A hybrid defensive player who has upside and good balance. Seems undersized but fully capable to handle stronger, bigger, quicker players. Is constantly producing at a high level. A vocal and leader physically. Has good athleticism, timing and overall strength. Isn’t easily fooled, can swim away from blockers and get to QB in the backfield. A very strong run stopper who makes good contact and can deliver powerful blows.