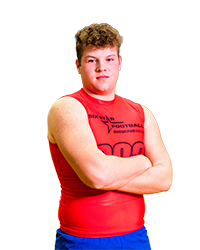 ▪️  SIX STAR FOOTBALL SCOUTING REPORT A rising 2024 defensive lineman, Ables was among the Olathe West team leaders in sacks (2), tackles (45) and tackles for loss (9). At 6’0, 240-pounds, Ables is a strong, physical prospect with good lower body strength, power and a bog motor that is always running hot. He had several strong marks in the combine portion of the Midwest Showcase, including a 5.30 laser timed 40-yard dash, 93 inch broad jump and 26 inch vertical leap — all respectable numbers for a defensive lineman. He mostly played defensive end this season where he was especially tough against the run, quickly working his into the backfield, helping set the edge and making clean tackles. Ables can also play on the interior of the defensive line and is a strong pass rusher. Also a standout student, Ables reports a 4.0 GPA.

▪️  ANALYSIS An underrated athlete as a defensive lineman prospect. Ables impressed during agility work drills, showing quick feet. He has a strong lower base, good technique and plays the game with a big motor. He impressed during 1v1s as he used a combination of quickness off the snap and a low pad level to consistently beat offensive linemen. Most of his film this past season was at defensive end, but we also like him on the interior of the line where he can use his strength to clog up the run and demand double teams.

DE's that shined & Raised their profiles at the Midwest Showcase in St. Joseph
Scroll